Virginia Beach like most of the US, is a hot spot for fantasy football enthusiasts. We’ve all heard about it and at Temptations it is one of our favorite types of parties to entertain at. Even if your knowledge

of football is small or even if you don’t know much about football at all, you can still have a blast joining one of the many fantasy football leagues around Hampton Roads. Fantasy football gives each

participant the feeling of belonging to a team, and what’s more is you have control over your team!

Whether it’s a public league or private, just for kicks and bragging rights or you’ve decided to make it interesting and join a league that plays for money, from our perspective as the hired adult

entertainment, it was clear that at fantasy football parties, fun is sure to be had by all.  So we wondered what makes this fantasy competition so enticing? We were tired of just being the

dancers at these draft parties. We wanted to know what was going on!!

So we did a little digging and here’s what we found out! 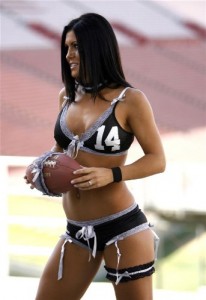 You get to draft your players.

That’s right, just like the big guys. If you play with a local league say, here in Va Beach, as opposed to an online league, then you will likely be invited to a fantasy football draft pick party. If

you’re lucky, it’ll be a cool party where they have strippers pouring drinks and providing the sexy adult entertainment, you may even get to meet/talk/flirt with one or two of us!

So you meet up at a cool party and all sit around taking turns picking your team. We noticed it’s important to choose a player that will represent each position needed on your team. This is important

so you don’t get stuck with 5 wide receivers and no running backs. Temptations will be happy to provide all the tight ends. 😉

But seriously, once your team is built you’ll need to keep a close eye on how they are performing, what’s cool is if they start to do poorly you can trade them with another team owner or drop them for a free

agent. Your team then advances each week until the playoffs. That’s when you have another party with Temptations strippers of course!

A few pieces of fantasy football advice we gathered from dancing at parties and doing research online:

Temptations is a Virginia Beach based company and has some of the most exotic and beautiful girls on the east coast. Our company is open 24/7 and we are committed in finding perfect escorts, models, exotic entertainers, and strippers for our customers.
To book an escort or Stripper please call (757)463-4630

Temptations is a Virginia Beach based company and has some of the most exotic and beautiful girls on the east coast. Our company is open 24/7 and we are committed in finding perfect escorts, models, exotic entertainers, and strippers for our customers.